While working for Tootle app (a ride sharing application launched in Jan 2017 inside Kathmandu valley), we conducted a simple NPS (Net promoter score) survey through the app.

By February, there was a significant no. of client base in Tootle already and it was only growing. So, we thought of experimenting new ways of gathering customer experience data with the app. Hence, NPS was it.

I have discussed more about NPS introduction and concept on my previous blog:

In the application, we used the famous NPS question:

“How likely are you to recommend Tootle to your friends?”

The feedback question was sent through the app itself to the Tootle clients who had a history of taking atleast one Tootle ride. The design of the feedback dialog box was overseen by me with the designer. We tried our best to make it readable with the use of colors and smileys. 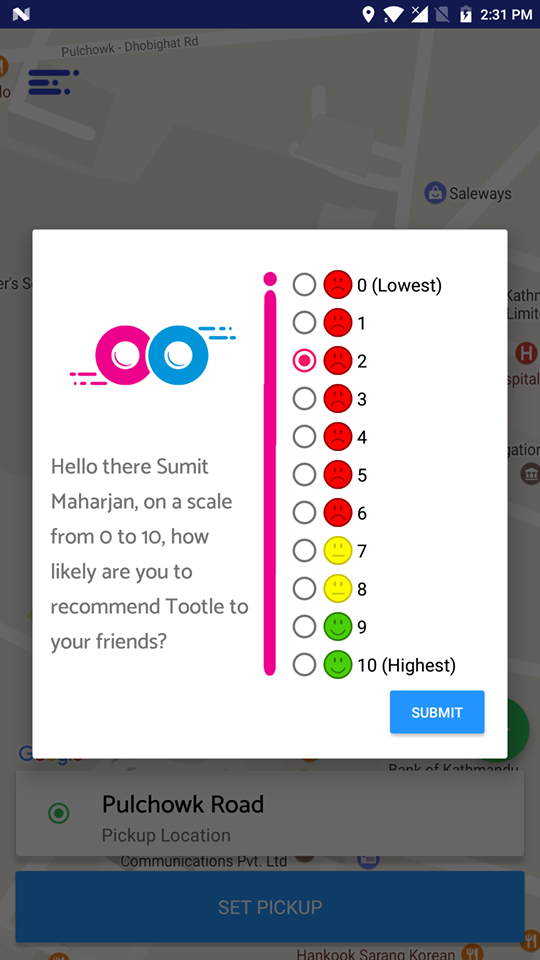 The data of promoters, passives and detractors was derived from the survey. The promoter’s data was used to improve the ratings of the application.

The issue we were having on the feedback end was that the app’s negative feedbacks were directly fed into playstore review however the positive ones were very personal via facebook message or email. The objective was to reflect the positive reviews in the ratings. The challenge was to generate this in an organic fashion. Therefore, we planned on first conducting an NPS question survey and then based on the promoters identified leading them to rating pages through email marketing campaign.

The promoter’s data from NPS and via Tootle operation team was sampled and finally an email marketing campaign was designed. The graphics and languages of the email was constructed with utmost care trying our best not to bug the clients and lead them correctly.

The call to action button “Rate now” was lead to the Tootle playstore review section where people can rate the apps. 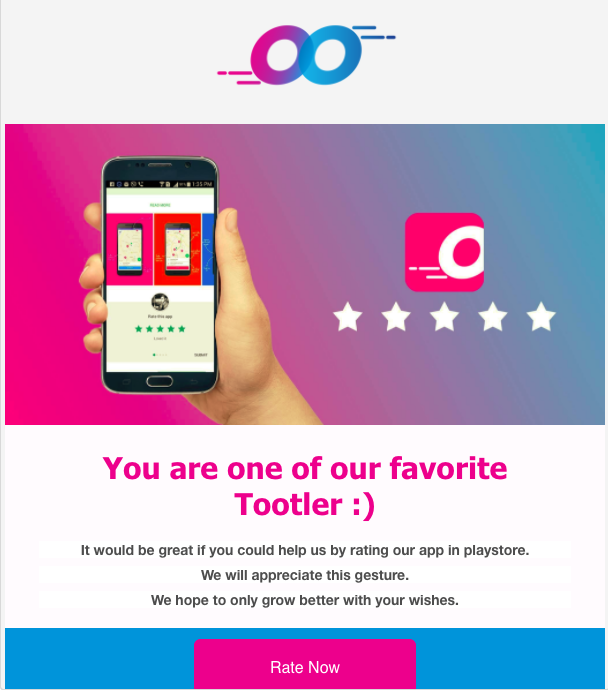 However, the results from this email marketing campaign showed that there were only 26% Unique Opens and 8% Unique Clicks. This indicated that a lot of our clients do not check the emails in the “Promotion” category. However, the clients under unique opens were the very loyal customers i.e almost the daily commuters through Tootle. It seemed that only people who genuinely love the brand preferred going through promotional emails.

During the month we ran the marketing campaign, the no. of users who rated the app with 5 stars increased thrice than the previous month. All in all, the beauty was to use the NPS data for email marketing purpose to eventually increase the app ratings organically.